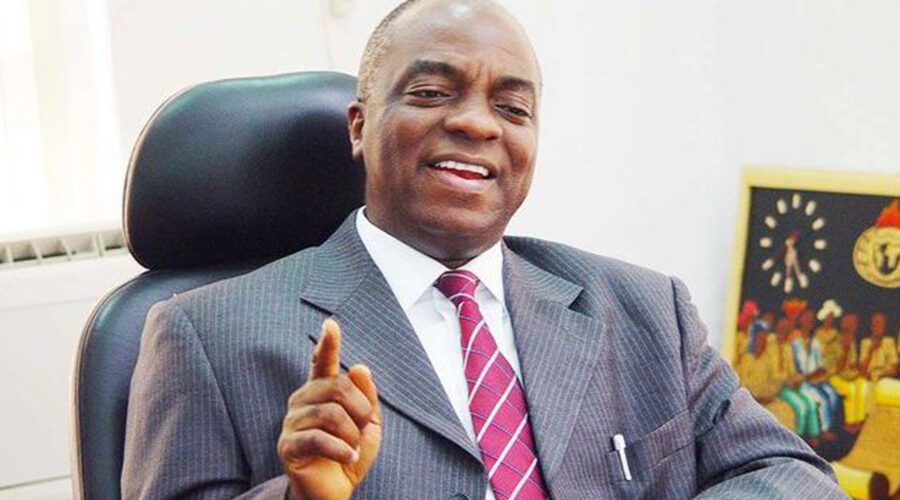 Nigerian preacher, Christian author, entrepreneur, and architect David Olaniyi Oyedepo. He is the leader of the Faith Tabernacle in Ota, Ogun State, and the founder of the Living Faith Church Worldwide (Winners Chapel). David Oyedepo is a household name in the gospel ministry.

The churches that make up the Winners Chapel International network are spread throughout different states in Nigeria and other parts of the world. Oyedepo is one of Nigeria’s most influential speakers and is considered as one of the founders of the Christian charismatic movement in Africa. He is the chancellor of Covenant University and Landmark University. He was recognized as Nigeria’s wealthiest preacher in 2011 by Forbes magazine.

On September 27, 1954, David Olaniyi Oyedepo was born in Osogbo, Nigeria. He hails from Omu-Aran, a local government in Kwara State’s Irepodun Local Government Area. He was raised in a multireligious family. His father was the Muslim healer Ibrahim. His mother Dorcas was a member of the Holy Order of the Cherubim and Seraphim Movement Church, a branch of the Aladura movement in Nigeria (C&S). His grandmother in Osogbo, where he was raised, gave him the fundamentals of leading a Christian life by going with him to early morning prayers. She also emphasized to him the need of tithing.

Oyedepo studied architecture at the Kwara State Polytechnic’s Ilorin campus. Additionally, he has a Ph.D. in Human Development from Honolulu University in Hawaii.

Oyedepo briefly worked for the Federal Ministry of Housing in Ilorin before departing to concentrate on his missionary activity. Oyedepo was “born again” in 1969 thanks to the influence of his teacher, Betty Lasher, who cared about him throughout his high school years. He asserts that in May 1981, he received a commandment from God through an 18-hour vision to preach the word of faith in order to rescue the world from all satanic oppression. The Liberation Faith Hour Ministries, subsequently known as the Living Faith Church World Wide (LFCWW), was founded in 1981 with this as its founding vision.

Pastor Enoch Adeboye, General Overseer of the Redeemed Christian Church of God, officially installed David and his wife Florence Abiola Akano (also known as Faith Abiola Oyedepo) as pastors on September 17, 1983, two years after they were appointed. Five years later, Oyedepo was ordained as a bishop by the late Archbishop Benson Idahosa, who served as his life mentor.

After Oyedepo purportedly received instructions from God to minister to Lagos inhabitants, the Living Faith Church, which was originally founded in Kaduna, moved to Lagos, the nation’s former capital, in July 1989 in order to start a new branch of the church.

Oyedepo claimed that God had instructed him to build a new base for the commission in 1998 in order to handle the increasing number of worshipers. This led to Oyedepo’s church purchasing the original 530-acre (2.1 km2) structure, known as Canaanland, which serves as the headquarters. The “Faith Tabernacle,” a theater with 50,000 seats, is situated there. They also recognized this accomplishment in the Guinness Book of Records. They completed the construction in a year. According to reports, they incurred no debt in the construction of this building. On September 18, 1999, this 50,000-seat edifice was dedicated under the administration of the late President Olusegun Obasanjo.

A 50,000-seat auditorium, the church’s secretariat, the church’s youth chapel, a primary school called Kingdom Heritage Model School, a full-boarding mission secondary school called Faith Academy, with over 1,500 students, and the Covenant University facilities, which can accommodate over 7,000 students and house them all in cutting-edge dormitories, are all located on the 5,000-acre (20-km2) estate known as Canaanland. The church also operates a variety of for-profit companies on its Canaanland campus, including a bakery, a water bottling plant, a gas station, a number of restaurants and shops, as well as a number of homes for its more than 2,000 staff members and guesthouses.

Four banks total—one community and microfinance bank managed by the church, and three external commercial bank branches—are located on this site. The entire area of Canaanland, which would also include the construction of Canaan City, with its 15,000 homes, had increased to 17,000 acres by 2012.

Each December in the same Faith Tabernacle, Shiloh, the largest annual meeting of the ministry, draws tens of thousands of participants from all over the world. The ministry is building a 100,000-seat amphitheater known as the “Ark,” which is rumored to be the building with the greatest span on the entire planet.

Due to his teachings, Oyedepo is included in what is known as the Word of Faith Movement. He has mentioned Kenneth Copeland, Gloria Copeland, the late Kenneth Hagin, E. W. Kenyon, T. L. Osborn, Smith Wigglesworth, and Bishop Benson Idahosa as mentors. Oyedepo has been compared to several of his mentors and branded as a proponent of the prosperity gospel.

The Word of Faith Bible Institute is a Bible training institution that is open to both members and non-members of Winners’ Chapel International. Its mission is to develop leaders and potential pastors while also raising public knowledge of Christian principles. The main branches of the church are in charge of running the institute.

Bishop Oyedepo is the richest preacher in the world, according to Forbes, with a net worth of more than US$150 million. Four private jets and a number of buildings, including ones in the US and London, are supposedly owned by the church. Covenant University, Faith Academy, and Kingdom Heritage Model Schools were established under Oyedepo to educate young people for a global effect. In Calabar, Cross River, Nigeria, construction is presently underway on a third university, to be known as Crown University.

Oyedepo is a steadfast opponent of corrupt practices in all facets of African leadership, governance, and society. He is also a well-known opponent of President Buhari.

In 1982, he wed Florence Abiola Akano (now known as Faith Oyedepo). They have four kids altogether (David Jr., Isaac, Love, and Joyce). Kenneth Copeland ordained Isaac and David Oyedepo Jr. as pastors in May 2007. David Oyedepo Jr. previously served as the resident pastor of the Ministry’s main church (Faith Tabernacle) with his wife Kemi, while Isaac Oyedepo heads Winners’ Chapel International in Maryland, in the United States of America, with his wife Ayomitide. His first kid, Love, is wed to Winners’ Chapel co-pastor Stephen Ogah. Joyce Priscilla is his last child and second daughter. She wed Abimbola Abodunrin in 2020.

The Covenant University Alumni Association created the DODOS program with the goal of showcasing Oyedepo’s contributions and way of life. It is expected of people who connect with this initiative to give back to other people, organizations, or society at large. On Oyedepo’s birthday, September 27, 2012, it was introduced.

One of the most well-known people in Nigeria is Bishop David Oyedepo, who has been at the center of several scandals. This was inevitable considering his social standing. These scandals cover a wide range of topics, including finances and other aspects of daily life. See how he became involved in and handled some of these issues by looking at a few of them.

The Beating of Journalists and State Officials

In September 2013, members of the Winner’s Chapel attacked staff personnel of the Ogun State Ministry of Urban and Physical Planning as well as two accompanying journalists. At the church’s administrative center, they were handing out the notices for the building inspections. Reports state that the journalists suffered serious harassment, that their camera records were stolen and deleted, and that their cameras were seized and destroyed. David Oyedepo was present throughout the incident, but he did nothing, according to their report.

The court’s decision, in this case, mandated that the church reimburse the victims’ medical expenses, replace any damaged cameras and other items, and condemn the five church members who had been identified.

You will also like: Who Is The Founder Of The Dunamis Church Abuja?

Nigerians witnessed Pastor Oyedepo advising his church members to kill any Muslim attacker they came across on church property in a 2017 video. He claimed in the video that the Boko Haram faction forewarned him of an impending attack on his church. He urged the assembly to pray and ask divine judgment on both these people and the elected officials who are standing by them. He continued by advising them to murder any members of the cult who came within range of the church and let their blood flow. When news of the video spread around the country and provoked panic, the church stepped up to his defense.

In defense of themselves, they said that the video wasn’t current and wasn’t a response to the atrocities in Southern Kaduna. They claim that the video was made in 2015 after the Boko Haram crisis. The video was therefore judged to be fake and to have overlooked the current national issue.

In January 2015, Bishop Oyedepo and supporters of the APC got into an argument. David met with Goodluck Jonathan, who was in office as president at the time, prior to the 2015 elections. During his visit, he made some comments that led to abuse and criticism from the APC group. He allegedly threatened to open the gates of hell to Goodluck Jonathan’s opponents. Others asserted that there was no need for alarm because the APC members had applauded when Fr. Mbaka spoke out against Jonathan, despite some opposition party members insulting and attacking him.

But making such a claim was denied by Winner’s Chapel’s founder and president. He allegedly vowed to open the gates of hell to anyone who opposed Nigeria. He also advised the assembly to pray for a peaceful election in Nigeria.

The firing of 40 pastors by the Winner’s Chapel on June 25 under the pretext that they weren’t producing enough money was made public in 2021. One of the dismissed pastors was forthcoming with the media about the circumstance. They were sent an invitation to a gathering, and Peter Edwin stated that he and other pastors were each given a letter. When the letter was opened, it was a bag letter. He asked the administration why they were being fired, and they stated that the church does not operate at a loss.

They said he was supposed to raise the money from his church branch to pay for his expenses. In response, David Oyedepo asserted that the removal of the pastors was not driven by economic motives. He asserted that the church does not tolerate failure and that such pastors disregarded their duties and bore no fruit.

Oyedepo is a publisher of magazines as well as a writer of more than 70 books. He leads and publishes Dominion Publishing House, the ministry’s publishing branch (DPH). Over 4 million DPH prints have been delivered thus far. It was put into operation on December 5th, 1992. A few of the written books are.

Bishop David Oyedepo is a sincere person. He has been commended for his humanitarian efforts. Among these honors are the following examples:

Bishop Oyedepo is the richest preacher in the world, according to Forbes, with a net worth of more than US$150 million.