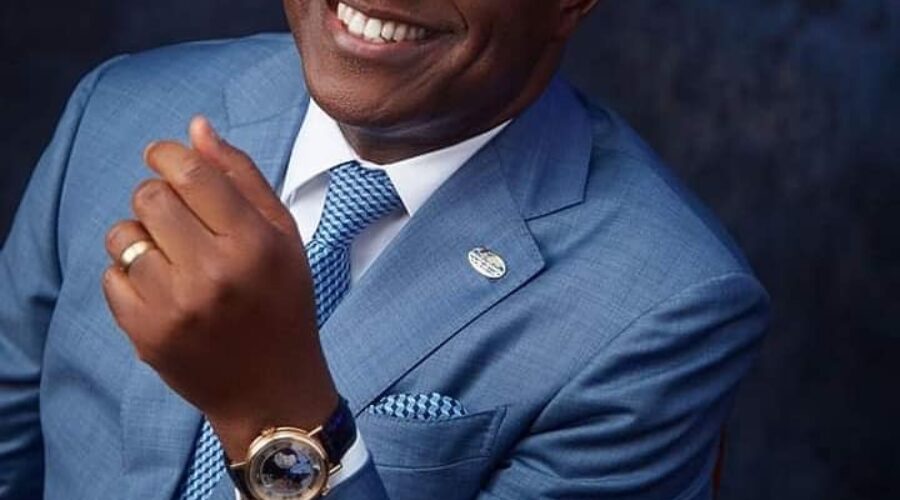 Salvation Ministries, with its headquarters in Port Harcourt, Rivers State, Nigeria, was founded by Pastor David Ibiyeomie, a Nigerian pastor, author, and televangelist. He is the leader of one of the biggest congregations and churches in Nigeria and the entire world. The well-known pastor’s church began in 1997 and has since quickly grown to include more than thirty branches all around the world.

On October 21, 1962, David Ibiyeomie was born at Bonny Island, Rivers State. He is a native of Bolo Town, which is located in Rivers State’s Ogu/Bolo Local Government Area, Nigeria. The late Chief and Mrs. Apollos Iganibo were his parents. His late father worked for the Niger Delta’s erstwhile Shell B.P., an oil exploration business.

He attended Banham Primary School Port-Harcourt first before transferring to Government Comprehensive Secondary School, Borikiri, where he completed his entire education. He was accepted in 1980 to the Rivers State University of Science and Technology in Port Harcourt to study microbiology. He also enrolled full-time in 1995 at the David Oyedepo’s Ministries’ Word of Faith Bible Institute (WOFBI).

The Bradley University of America gave him an Honorary Doctorate Degree in Divinity on May 15, 2004, in appreciation of his diligence and goal-oriented ministry.

David finished his study and after accepting Christ as his Saviour, God gave him the command to found his own church. In order to equip himself for the ministry, he enrolled in the Word of Faith Bible Institute (WOFBI), the Bible school arm of the Living Faith Church, popularly known as Winners’ Chapel.

After completing Bible college, he changed his moniker to “Salvation Ministries.” Following his conclusion, he sought Bishop David Oyedepo’s approval and blessing, his spiritual father and mentor, before beginning the assignment that God had given him: “To build the Kingdom of God on Earth by infallible proofs.”

When the church first began, 34 individuals, including himself and his wife, attended, including five men, ten women, and nine children. One of the reasons the minister gave for relocating his congregation to his home state was the fact that Bishop David Oyedepo, his spiritual father, was based in the Lagos area.

The church moved again from its location at Plot 35, Birabi, to Plot 17, Birabi Street in July 1999 as a result of the church’s continuous expansion due to an increase in attendance after settling in Port Harcourt.

Salvation Ministries formally began operating full-time on April 13, 1997. One of the Nigerian churches that are expanding the fastest is the ministry, which today has over 100,000 regular adult worshipers just in the headquarters.

The Ministry’s Cathedral Site (Hand of God), located in Igwuruta, Port Harcourt, Rivers State, is one of the largest auditoriums in the world and has contemporary, high-tech facilities that were erected for about N5 billion.

The church’s goal is to spread the gospel throughout the world. In order to fulfill its objective, the church is thought to have founded over 1,000 satellite churches and over 20,000 home cell centers.

With more than 25 years of experience in the ministry, David Ibiyeomie currently speaks to millions of people all over the world. While many people have the opportunity to see him each Sunday at church, many more watch him on the internet.

On January 26th, 2020, the church had its first seven services with simultaneous interpretation in Igbo, Hausa, French, Spanish, Arabic, Portuguese, German, Russian, Chinese, Italian, and Dutch, among other languages. Currently, the church employs well over 1,000 pastors (both full- and part-time), and other missionaries assist Pastor David in exercising the ministry that God has given him.

The minister also manages “5 Nights of Glory,” an annual celebration that has grown to be a significant international holiday.

Pastor David Ibiyeomie broadcasts a television outreach show called Hour of Salvation on several regional and worldwide networks, including Daystar Television (U.S.A.), KICC (London), GodTV, Inspiration International (U.K.), and BenTV, in accordance with his divine design. They include WJYS (Chicago), MCTV (Chicago), and ACBN, among others.

Because thousands of members routinely attend the majority of the church’s events, it is assumed that the church has amassed a large number of donations, vows, and tithes. Even the preacher himself acknowledged making a $1,000,000 offering at a Sunday service in one of his speeches.

In addition to the numerous church functions that the well-known man of God hosts, he also is in charge of a nondenominational institute that trains future ministers. The institution is similar to Oyedepo’s WOFBI, where he studied before starting his ministry. It is a place where Christians can learn the skills they need to successfully deal with life’s obstacles. The Bible is taught there.

YOU WILL ALSO LIKE: David Oyedepo Biography (Age, Net worth, Church)

The brand-new aircraft apparently arrived around David Ibiyeomie’s 55th birthday in 2020 after being purchased. Since he had previously given God a million dollars as an offering during a Sunday sermon while welcoming his new family member, the pastor argued he was overqualified to buy a jet.

In addition to many other luxury items, David Ibiyeomie’s magnificent residence contains a collection of pricey cars that you would often only find with moguls. The majority of the cars in his fleet are gifts from family members and well-wishers all over the world.

In October 2021, Ibiyeomie claimed that The Master’s Place International Church’s founder Komaiya bought him 12 cars in a year and made an offer of a million-dollar wristwatch. The minister had already confessed to giving away 56 cars in a single month a few months prior to his admission. The Rolls-Royce Phantom, Limousine, and Range Rover are among Ibiyeomie’s collection of opulent automobiles.

Due to his passion for study and drive for excellence, he launched Chockhmah International Academy, the primary and secondary education section of Salvation Ministries. The Pace-Setters University is also being constructed by the Commission at the moment.

Without outside help, a bank loan, or any financial pressure, David Ibiyeomie, with the help of God as claimed by him undertakes great projects like building a massive cathedral that costs millions of dollars and acquiring more than 200 hectares of land all at once for the university project.

Pastor David Ibiyeomie has helped flood victims in affected areas as well as war-torn countries like Liberia, Bayelsa, and Jos out of compassion for people. He also helps the underprivileged through his humanitarian programs and scholarship projects. 634 students in primary, secondary, and postsecondary levels received scholarships from him in 2016.

In order to hasten the patient’s rehabilitation, David Ibiyeomie, through Salvation Ministries, rebuilt and donated contemporary medical equipment worth over $200k USD to the pediatric area of the University of Port Harcourt Teaching Hospital (UPTH) in Nigeria. Ibiyeomie is committed to establishing a compassionate society that is filled with dignity and peace.

He also constructed a number of roads and restored the fence at the Central State Primary School in Igwuruta in an effort to raise the standard of living in Port Harcourt.

He is currently building a home for the aged in Port Harcourt that will be equipped with state-of-the-art amenities to enable senior individuals who require some assistance with daily tasks and health care to age with dignity. He built residences with contemporary conveniences for the workers and pastors, including Glorious Court, Success Court, Kings’ Court, and Teachers’ Quarters.

Occasionally, pastors of David Ibiyeomie’s caliber confront criticism. Like many others of his kind, the minister has come under fire for making certain controversial statements that primarily worry the general public.

Hate Speech Against the Ogoni People

The Movement for the Survival of the Ogoni People demanded an apology from Ibiyeomie after he allegedly made anti-Ogoni remarks in January 2017. On January 16, 2017, during his 5 Nights of Glory Crusade, the minister allegedly referred to the Ogoni as the worst and most terrible tribe in Nigeria and claimed that an Ogoni man could make someone insane with merely N500.

The leading Ogoni organization, the Movement for the Survival of the Ogoni People (MOSOP), responded to the alleged accusations by calling them an expression of extreme hatred for the Ogoni people and the reason for the crusade’s timing at a time when the nation is attempting to forge national unity and integration.

In March 2017, journalist Kemi Omololu-Olunloyo asserted that Ibiyeomie was dating Nollywood actor Iyabo Ojo. Olunloyo was then arrested for slander and her bail was rejected. Nevertheless, she was set free. David Ibiyeomie strongly denies the accusations.

In September 2020, a Salvation Ministries pastor was outed for allegedly threatening to kill Daddy Freeze, a Nigerian radio host, and internet sensation, since the latter had criticized Pastor David Oyedepo of Living Faith.

In the video, Ibiyeomie repeatedly refers to Daddy Freeze as a bastard and makes threats to have him killed and torn to pieces. The remarks of the two well-known people divided Nigerians, with many criticizing the minister for his threats.

Pastor David was observed giving a sermon at the church where he advised his congregation not to support candidates who urinate in their underwear like babies. He attributed the phrase “Woe betides any nation whose leader is like an infant” to the Bible.

Asiwaju Bola Ahmed Tinubu’s supporters expressed their displeasure on social media because they believed the remarks made by the well-known bishop were directed at the APC candidate (APC).

In addition to his work with the television ministry, Pastor David Ibiyeomie has published a number of books. He is considered as one of the leading authorities on success, excellence, divine health, prosperity, and the holy spirit and has written over 55 best-selling books to his name. The following are some of his best-selling books:

The church business is incredibly lucrative, and Pastor David Ibiyeomie has created a lot of methods to gain wealth, similar to many other well-known pastors around the world. They include making public addresses, penning books, network television, and, of course, contributing offerings and tithes. Ibiyeomie has surely accrued a huge wealth thanks to his status as one of the top five richest pastors in the world. His net worth is thought to be $41 million.